Can't find what you're looking for USE OUR SEARCH option

Fight Back Join Other Court Victims

It does not matter what party you belong to or where you live, Government Corruption is at epidemic stages. Judges and lawyers have created their own class and have weaponized our court system

Probate Court is being Weaponized by Dishonorable Judges and Unethical Lawyers

Probate Courts have become Weaponized by Bribed judges and unethical, immoral lawyers who are only after money and control. Hidden behind fake words like Guardianship or Conservatorship which claim to protect are just fancy legal terms that rob victims of all their rights, possessions and freedoms.

Because Americans are at war with a broken legal system based on profit and greed not evidence, fact or truth. We need to take back our legal system

Probate Court is being Weaponized by Dishonorable Judges and Unethical Lawyers

Probate Courts have become Weaponized by Bribed judges and unethical, immoral lawyers who are only after money and control. Hidden behind fake words like Guardianship or Conservatorship which claim to protect are just fancy legal terms that rob victims of all their rights, possessions and freedoms. 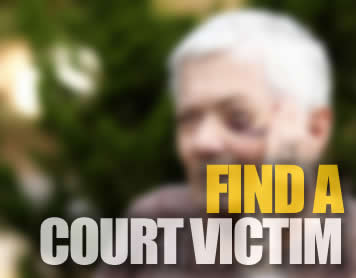 North America has an epidemic of Judicial Victims due to the corruption and fraud in our court system. Find other victims or add yourself.
Read more » 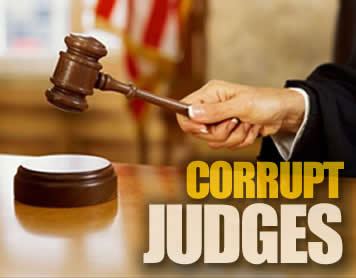 Judges have become America's number one enemy to Justice. Bribery, fraud and abuse of authority have destroyed any hope of fairness, law and order.
Read more » 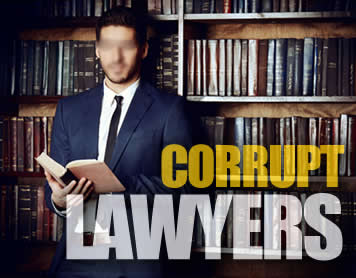 Lawyers are out of control in America and have created a "Above the Law" class. The American bar runs a gang of thieves who've weaponized our courts
Read more »

Network, Find victims and support. Join existing User Groups or create one to make contact with other victim. See our support page for help.
Read more » 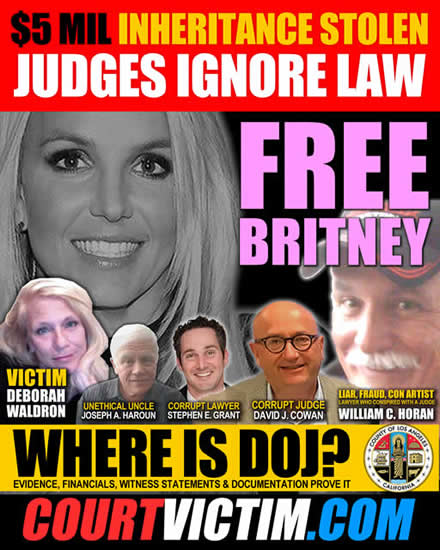 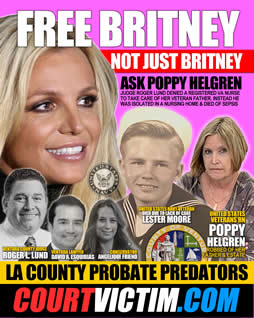 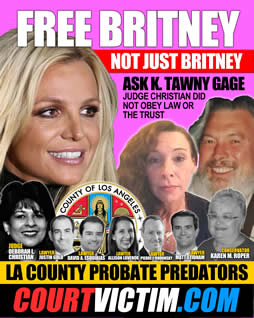 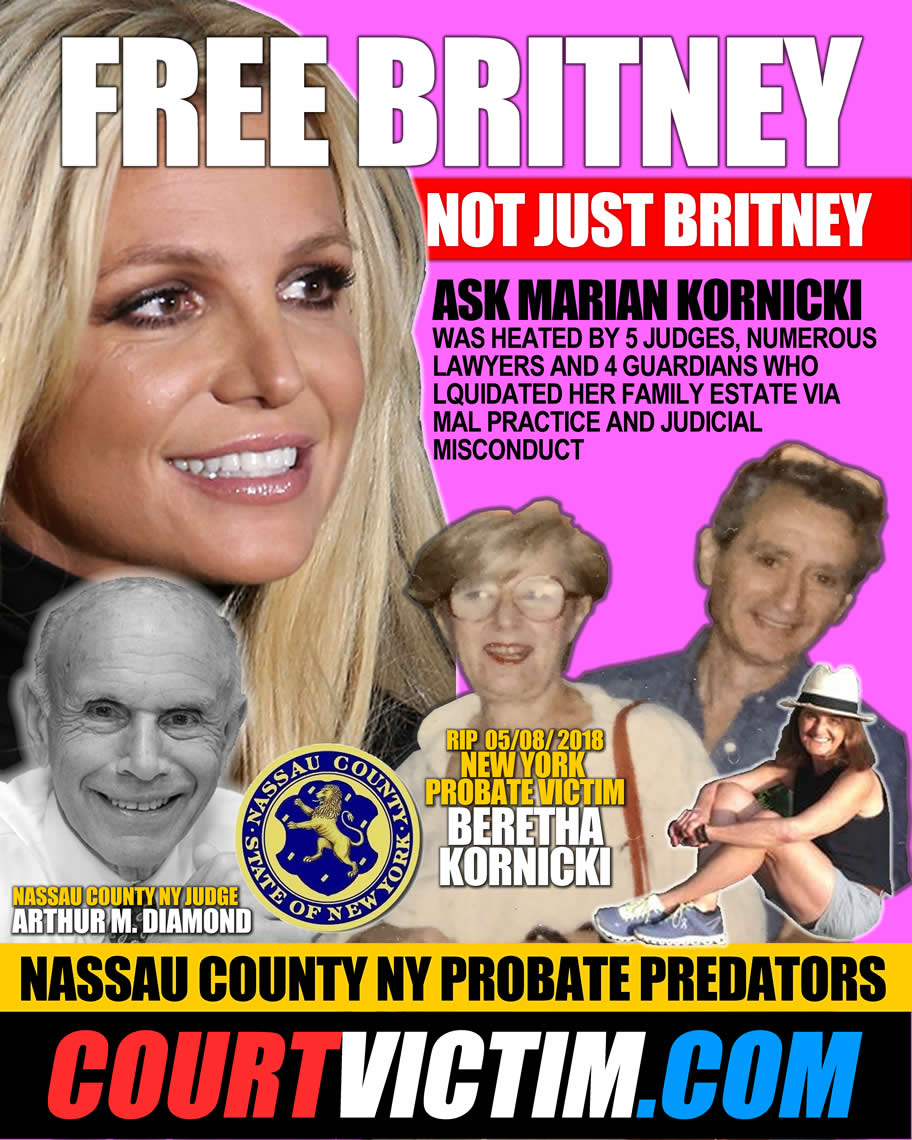 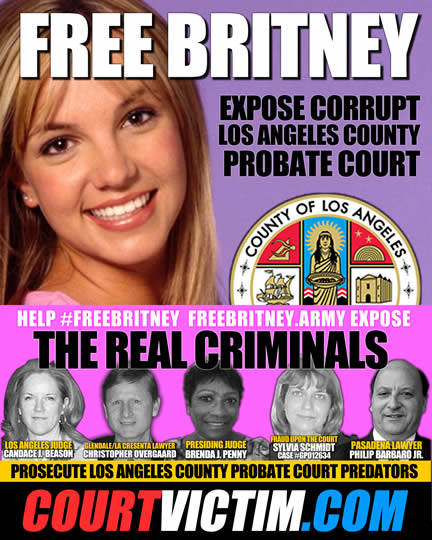 For decades Judges and Lawyers have been hiding and extorting victims of the biggest Holocaust of the 20th century. Victims are ripped from their homes against their will and robbed of all their possessions, stripped of anything of value and locked against their will in nursing homes or facilities. Via the use of abused, over medication by lying and manipulating doctors victims are made out to be mentally ill. The goal is to liquidate their life savings, take control and ultimately kill them all in the name of legal fees and bribes for totally dishonorable, unethical judges protected by the American bar. It's NOT just the elderly or handicapped this happens to anyone with money. Look at Britney Spears and Bradford Lund (Disney family) READ our letter to the United Nations

Judicial Corruption – SBX-211 Cover-up by California Government update A brief overview of the Richard I. Fine Judicial Abuse Crime Follow-up comments to an LA Times Article posted below: Note Judge Yaffe’s Order, where he states in pertinent part:   “… He refuses to even discuss his obligations to the judgment creditor, but portrays himself as a lone hero who is being incarcerated because he has exposed a vast conspiracy of over 400 judges of this court who are dishonestly collecting money to which they are not entitled. This contention has now been rejected at all levels of the Federal and California Judiciary.” Clearly part of that passage is misleading and arguably could be called false, as the case of Sturgeon v. LA County, et. al. (2008) 167 Cal.App. 4th 670, rev. denied, in fact found and held that the double benefit payments that the LA County Superior Court judges had been receiving since 1988 were – UNCONSTITUTIONAL – or illegal.  Wouldn’t this fact give a reader of the article a totally different perspective on what Mr Fine was doing?  On what Judge Yaffe was doing?  On what the other courts… Read More

CHAPTER TWO INTRODUCTION TO PSYCHOPATHS: MEGA-LAW-MANIA Traits Of A Psychopath: Boldness = Low fear including stress-tolerance, tolerance of unfamiliarity and danger, high self-confidence and social assertiveness. Disinhibition = Poor impulse control including problems with planning and foresight, lacking affect and urge control, demand for immediate gratification, poor behavioral restraints. Meanness = Lacking empathy and close attachments with others, disdain of close attachments, use of cruelty to gain empowerment, exploitative tendencies, defiance of authority, destructive excitement seeking 4. If you are arrested in California, the deck is stacked against you. For decades, the cops, prosecutors, judges, and politicians in power have eviscerated your constitutional rights to make their jobs easier to perform. Their livelihoods rely on law enforcement winning, and those in their path losing. You are collateral damage along their career path. Collusion at the highest levels tilts the tables against you, and towards the “police powerists” who use convictions as stepping stones and power chits. These powerful jobs attract people who desire power: psychopaths. Government j obs with uniforms, authority, guns, and badges are an attractive lure. 4 Patrick, C.; Fowles, D.; Krueger, R. (August 2009). Triarchic conceptualization of… Read More

One of the most notorious dishonorable and corrupt judges in Los Angeles County Probate Judge Reva G. Goetz stated “I think she can get married. I don’t think we ever removed that right from her. But you might not want to tell her that!”Ingham seemed to “laugh along and agree.” Samuel Ingham her lawyer whose made millions off Spears for years doing what accounts to legally (because it’s done in a court) but ethically (Illegally) transferring Britney Spears hard earned savings to his own estate. Ask Ingham’s other Probate Victim Ernest Moore about Inghams methods, or Kerri Casem who only had a fraction of Spears networth. Welcome to the legal Scam and Fraud known as Conservatorship/Guardianship that big law firms and the ABA don’t want outsiders to know about. Legal stealing by lawyers,judge approved. VIEW FROM HERE-California’s most secretive and most corrupt institution is its judiciary. Britney Spears is subject to a conservatorship under the Probate Department of Los Angeles County Superior Court. The state court is corrupt, from its Chief Justice Tani Gorre Cantil-Sakauye at its tippy top down to the court clerks. Those who do not go along… Read More

THE MARIPOSA COUNTY CORRUPTION CASE OF JERRY COX Help this good man fight to get his home back! False accuser, Ashley K. Harris, “CRIES WOLF” and says that she was “KIDNAPPED ” at this Cabin in the Woods in Mariposa County California for 3 days and RAPED! Where Ashley resides, a female judge, in San Luis Obispo Superior Court sees thru her web of lies, CASE DISMISSED! Back in Mariposa County, the innocent accused man, Jerry Cox, had to pay $500,000 bail, and $100,000+ in attorney fees to bring justice to the surface against 15 felonies on phoney rape and kidnapping charges and now is on the brink of loosing everything! How ? Mariposa County Officials retaliate by manipulating their backwoods court to sell his home, business, and life savings for the sole purposes to remove him out of their community in reach for their personal and financial gains. Prior to paying a $500,000 bail, Jerry Cox was arrested and behind bars for 30 days on these false “KIDNAPPING and RAPE charges! This is when the Mariposa Sheriff’s Department came out to his home and “SHOT” in cold blood his… Read More

William M. Windsor has driven to all 50 states interviewing and filming over 2,000 victims of government, judicial, and law enforcement corruption. He has posted thousands of videos to LAWLESS AMERICA YOU TUBE and has published thousands of articles at LAWLESSAMERICA.COM. He and 300 victims met in Washington, DC and personally presented testimony to Congress using DVDs of the testimony Bill gathered nationwide. His tireless efforts to expose corruption put a giant target on his back, and he’s been jailed unlawfully, endured hundreds of death threats, and survived attempted murder. He lost his family due to fear, and he took a break from his efforts, but in September 2021, he is back with full force. His Facebook page is billwindsor1 About William M. Windsor I began my career as a junior at Texas Tech University. I became involved in the T-shirt business in college, and after several years as a retailer, wholesaler, and manufacturer, I launched the trade magazine and trade show for the industry. I am considered by many to be the father of the multi-billion dollar “imprinted sportswear industry.” I started other magazines and shows, and sold the… Read More

WHAT AMERICANS NEED TO UNDERSTAND IS OUR SYSTEM IS OVERRUN WITH FRAUDS AND CRIMINALS POSING AS JUDGES Jeffrey Moffatt was arrested 9-3-21 Friday on “Federal Grand Jury Criminal Indictment,” by DOJ Criminal Charges claiming “Wire Fraud.” What happened to Moffatt is nothing more than retaliation, because Moffatt exposed Arizona’s “Judicial Imposter,” Judge William J. ONeil sat on the AZ Supreme Court bench, who claimed to disbar Moffatt, which was nothing more than a continued political hit job. Since AZ Supreme Court Judge O’Neil is a “Judicial Imposter” the alleged Disbarment Order against Moffatt, by O’Neil, dated 04/19/2016, is “Null and Void.” Moffatt lives by upholding the quote – “If a law is unjust, a man is not only right to disobey it, he is obligated to do so.” ~ Thomas Jefferson. As such Moffatt did not have to obey the bogus Disbarment Order by O’Neil dated 4/19/2016 and he went on with business as usual. Additionally AZ “Judicial Imposter,” O’Neil, has even made decisions on some past Death Row cases. Did you know the AZ Supreme Court injected itself into Moffatt’s 2016 Congressional Race? When have you ever heard of… Read More

Rule 1.1 Competence (a) A lawyer shall not intentionally, recklessly, with gross negligence, or repeatedly fail to perform legal services with competence. (b) For purposes of this rule, “competence” in any legal service shall mean to apply the (i) learning and skill, and (ii) mental, emotional, and physical ability reasonably* necessary for the performance of such service. (c) If a lawyer does not have sufficient learning and skill when the legal services are undertaken, the lawyer nonetheless may provide competent representation by (i) associating with or, where appropriate, professionally consulting another lawyer whom the lawyer reasonably believes* to be competent, (ii) acquiring sufficient learning and skill before performance is required, or (iii) referring the matter to another lawyer whom the lawyer reasonably believes* to be competent. (d) In an emergency a lawyer may give advice or assistance in a matter in which the lawyer does not have the skill ordinarily required if referral to, or association or consultation with, another lawyer would be impractical. Assistance in an emergency must be limited to that reasonably* necessary in the circumstances. Comment [1] This rule addresses only a lawyer’s responsibility for his or… Read More