Home » Articles by Admin
No comments 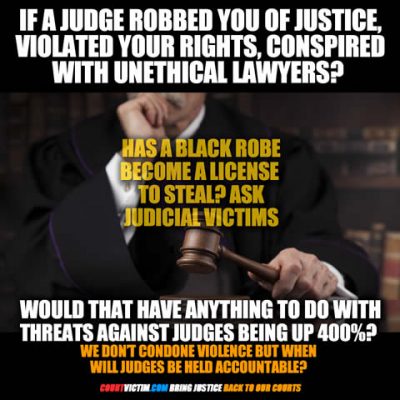 You have to have been victimized by a court to really see and understand the real problem going on with judges in America. The lawlessness, the abuse, the sheer disrespect against the public. With undeserved immunity and a broken system that defends the dishonorable and criminal judge racket that has existed for decades I think the breaking point is near. All you have to do is ASK THE REAL VICTIMS who have been robbed of justice by dirty judges and an epidemic of judicial abuse. I know myself I’ve endured the torture and helplessness of what judicial abuse victims must endure. It’s not just the sheer disrespect, perjury, fraud and embezzlement that went on in court. But the disrespectful manner that Judge Candace J. Beason treated a petition that exposed a criminal and her lawyer for abusing our mother. Yet this below human monster sitting on the bench who was obviously bribed and involved in a conspiracy with the X president of the Pasadena Bar and a law professor Philip Barbaro Jr. had the nerve to say “I don’t see anything wrong”. The total disrespectful, above the law attitude was… Read More 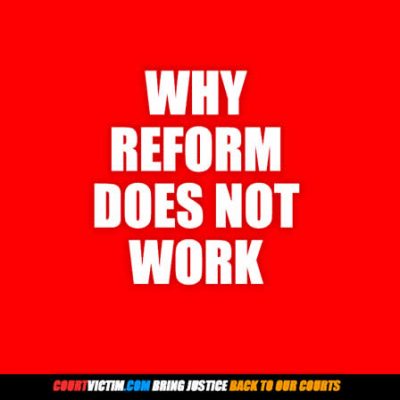 Why Legal Reform Doesn’t Work May 26, 2021 Op-Ed by Janet Phelan “The truth is a terrible thing, but not compared to falsehood.” – Jordan Peterson Legal reform is a banner under which many organizations fly. “Guardianship reform,” “Defund the police,” “End targeting,” “CPS reform” – some of these movements have clear political motivations and some simply seek to address corruption within the system. And none of them have really borne fruit. The reason is not the dedicated efforts of the organizations or individuals carrying these banners. The reason is that the very system through which reform is sought is a facade. Those in the guardianship reform movement are acutely aware that the system isn’t working. There are strong and protective laws on the books but every day, guardianship proceedings convene in courts across the US and laws are ignored, judges make decisions that have no standing in law and as a result, lives are destroyed. Assets are pilfered through these proceedings and in many cases, those under guardianship die under questionable circumstances. The Probate Murders: The War on the Vulnerable through the Courts (Part One) In some circumstances, the… Read More