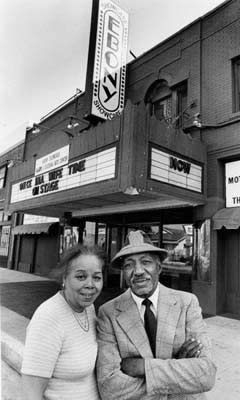 Imagine you’re an African American Actor, and you’ve been given the opportunity of a lifetime, a starring role in “Song of the South,” a film made by Walt Disney. Things didn’t go as planned. The movie was met with both praise and opposition. Both extremes in opinions continue to this day, and the movie is censored in the United States.

Jan. 16, 1947: Local 27 of the American Federation of Teachers, meeting in Washington, called the Disney feature film “Song of the South” “insidious and subtle propaganda against the Negro.”

Black L.A. 1947: Black, Jewish Protesters Picket Disney’s “Song of the South” at RKO Hillstreet Feb. 6, 1947: Protesters are picketing the RKO Hillstreet theater, where Disney’s “Song of the South” is playing. (The film was also picketed when it played in Washington, D.C.) The protesters at the downtown Los Angeles theater included members of the National Negro Congress, the American Youth for Democracy and the American Jewish Congress, according to Sentinel Theatrical Editor Wendell Green. Green also noted that The Sentinel and the Tribune staged a similar protest at Lowe’s State theater in 1942 over “Tales of Manhattan,” which featured Paul Robeson, Ethel Waters and Rochester. “Beale Street Mama,” playing at the Avadon theater, was withdrawn after protests, the Sentinel reported. The Los Angeles Times did not report on the protests.

Stewart grew up in Harlem and, for a time, the British West Indies. By the age of 14 he was dancing and performing standup comedy at “The Hoofers Club,” a legendary gathering spot for such dancing greats as Bill “Bojangles” Robinson, the Step Brothers and Honi Coles. He went on to appear at the “Cotton Club,” with many of the popular acts of the day.

In 1936 while appearing at the Paramount Theatre in Los Angeles with Cab Calloway and his band, Stewart was spotted by Mae West and signed for a role in her film “Go West Young Man.” He went on to appear in numerous films starring opposite such stars as John Barrymore and Bing Crosby. His credits include “Stormy Weather,” “Cabin in the Sky,” and “Carmen Jones.” In the 60’s, Stewart appeared in the opening scene of “It’s A Mad, Mad, Mad, Mad, Mad World” and more recently had a featured role in “Silver Streak”.

Stewart was a popular radio guest performer throughout the 40s and when television bowed in the 50s, he appeared often. On the popular “Amos ‘N’ Andy” TV series, he had the recurring role of Lightnin’. On Broadway, Stewart appeared in Irving Berlin’s smash musical “Louisiana Purchase.”

In 1950, Stewart built the Ebony Showcase Theatre in Los Angeles in order to give black performers an opportunity to play the types of roles they were denied elsewhere. Today, this theatre is one of the oldest and finest … theatres in the country and its alumni supporters include John Amos, Isabel Sanford and Margaret Avery. His theatre’s long-running production of “Norman Is That You?” was adapted for the screen by MGM.

After 57 years in show business, Stewart today focuses on working with young people in the … community. Stressing “education through entertainment,” he encourages youths from the inner city not to join a gang but to join a theatre group.

For stressing positive humanitarian themes in his theater productions and for culturally enriching his community, Stewart has been praised by the Mayor, the police commission, and written up in all the local newspapers. Earlier this year, he was named “Hometown Hero of the Month” by the CBS-TV affiliate in Los Angeles, which honored him with a month-long series of on-air profiles.

Stewart, his wife Edna and his daughter Valarie continue to operate the Ebony Showcase Theatre (a non-profit organization). The theater offers acting lessons as well as classes on writing, directing and film making.

The entire theater complex consisting of 8 apartments, an annex, a print shop, a thrift store, a restaurant, a house, was “green-tagged” (deemed safe to occupy) by both the Army Corps of Engineers, and the Los Angeles City Building Department, after the Northridge Earthquake. The complex was seized via a pre-judgment right to possession and demolished (building by building without a demolition permit starting in 1998) by the Los Angeles Community Redevelopment Agency under the guise that the buildings suffered extensive earthquake damage as well as damage by a tornado, that touched nothing else in the city, 3 years after the earthquake. Millions of dollars from the Commercial Industrial Earthquake Recovery Loan Program for loans to existing small businesses was diverted to the Community Redevelopment Agency (CRA)for the taking of the Ebony Showcase complex via costly eminent domain court proceedings that included the Ebony Showcase Theatre and the Stewarts as defendants, and not disbursed to eligible small businesses. Is it because because only insiders were told about the availability of recovery loans? The Stewarts weren’t informed, they were targeted instead.

Click here to read a news article with a badly photo shopped photo of Nick Stewart, that appeared in the Los Angeles Sentinel Newspaper. The article said that Nick Stewart couldn’t get assistance from the city because it would “be a gift of public funds. Yet the CRA built a new theater named after Nate Holden (the City Councilman who masterminded the take-over) that was built on the grounds of the demolished Ebony Showcase Theatre. At the same time that the article was written, Nate Holden’s friends and staff members successfully formed a non profit corporation called Ebony Showcase Cultural Center, before the Stewarts were evicted. They, not the Stewarts, were somehow eligible to apply for recovery loans although they had never occupied any buildings, nor had they done any business. Click here to read the articles of incorporation filed with the California Secretary of State by the clone attempt.

Nick passed away December 18, 2000, one week to the day after attending and protesting the groundbreaking of the Nate Holden Theater. 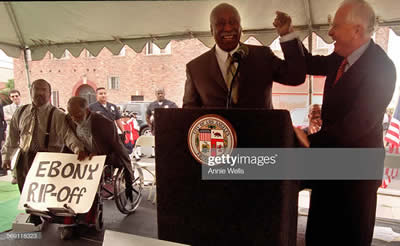 Here the caption that accompanies the above photo on getty images.com: “Tenth District Councilman Nate Holden and Mayor Richard Riordan raise their arms in a gesture of solidarity as they agree to begin building the new performing arts center that will be on the site of the former Ebony Showcase Theater. Nick Stewart, the original owner of the Ebony, left, in the wheelchair, with his son Christopher next to him, showed up uninvited and unannounced to show their disapproval of the project. They claim that the city tore down the original building unnecessarily and that the city illegally using the copyrighted name, Ebony Showcase Theater. (Photo by Annie Wells/Los Angeles Times via Getty Images)”
We are a 501(c)(3) nonprofit charity. Contributions are tax deductible to the full extent of the law.
No contribution is too big or too small. 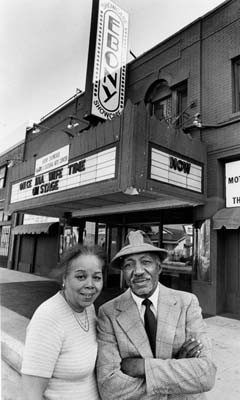 Original caption dated October 16, 1981, reads, “Nick and Edna Stewart have done a lot to change black stereotypes in theater with their plays since the days when Nick had an act as a comedian.” (1981, Paul Chinn/Herald Examiner Collection)

The Ebony Showcase building is among the Landmarks featured in the book, L.A. LANDMARKS LOST AND ALMOST LOST. The author, Cindy Olnick is Director of Communications for the Los Angeles Conservancy, the nation’s largest local historic preservation organization.

Roy E. Disney, vice chairman of The Walt Disney Company said, “Nick was a show business legend who made his mark in virtually every area of the entertainment spectrum from vaudeville and radio to motion pictures and television. As the voice of Brer Bear, he lent his vocal skills to creating one of Disney’s most memorable characters and a screen personality that was larger than life. In addition to his achievements as an actor and his important contribution here at Disney, Nick was a very passionate and caring individual who created a landmark Los Angeles theater and provided young people with a unique opportunity to participate in the theater and learn other related crafts.He will be greatly missed.”

YOUR SUPPORT WILL KEEP THE LEGACY OF NICK (BRER BEAR) STEWART ALIVE THROUGH PROVIDING POSITIVE ENTERTAINMENT, TRAINING, ACTIVITIES, AND BENEFITS TO OTHERS, IN HIS MEMORY, AT A NEW LOCATION. Help us convert a building in South Los Angeles to a community resource and performance center devoted to the arts, music, dance, positive expression and entertainment for all people, without regard to their age, income, or ethnicity.

HOW YOU CAN HELP: Volunteer to take up a collection or make a donation. Share the link to this website. Tell people about us. Call, text, or email if you want to volunteer or if you have ideas to share. Leave comments below about Nick and Edna Stewart and their Ebony Showcase Theater.

Nick and Edna Stewart used money earned to help thousands of others through the Ebony Showcase Theatre and charity. Valarie Stewart, the daughter of Nick and Edna Stewart, needs your help to keep the legacy of her parents alive, by continuing to provide Education, Artistic and Cultural Enrichment through Entertainment to our community and to the world, through the Ebony Showcase Theatre and Cultural Arts Workshop, the charity that they founded in 1950.