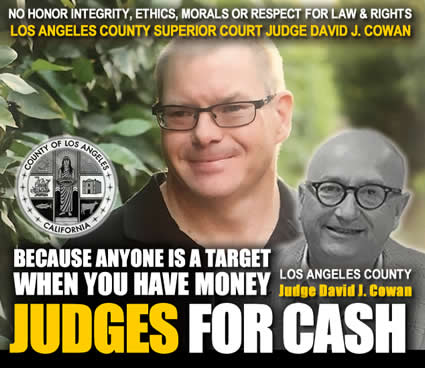 Walt Disney’s grandson has accused a California judge of denying him his $200million inheritance by falsely claiming he has Down syndrome, in the latest instalment of a 15-year legal battle to prove he is mentally capable.

Bradford Lund, 50, asked the state’s judicial watchdog to remove LA County Superior Court Judge David Cowan, for an alleged ethics violation during a probate hearing of the cartoon king’s will, claiming: ‘He’s unsuited to be a judge’.

In letters filed to the California Commission on Judicial Performance on Thursday, Bradford and his stepmother Sherry claim that Cowan made false ‘personal’ remarks and showed ‘bias’ by siding with ‘hostile trustees’ who receive $1million a year as long as delays continue.

In June last year Cowan is alleged to have said in open court: ‘Do I want to give 200 million dollars effectively to someone who may suffer from Down syndrome? The answer is no.’

Bradford, of Arizona, claims that a DNA test from a previous hearing proved that he did not have the condition and was able to manage his own financial affairs.

Walt Disney started his world-famous famous cartoon studio in 1923 which turned into an empire founded on family friendly entertainment, worth an estimated $130billion today.

He died in 1966, four years before his twin grandchildren were born, leaving a portion of his fortune, around $1.2billion in 2020, to his daughters Diane and Sharon and their descendants.

Bradford has been locked in a bitter family feud with his twin sister Michelle after their mother Sharon died of breast cancer in 1993 aged 56, leaving them her portion of the empire when they turn 35, as long as three appointed trustees find them ‘mentally capable’.

In a press conference on Thursday Bradford’s attorney, Lanny J.Davis, said of Judge Cowan: ‘He’s shown himself to be willing to act with bias, personal animus, makes willing false statements … he’s unsuited to be a judge’, as reported in The OC Register.

Lawyers also claimed that Cowan showed ‘personal animus’ towards Bradford and that he made dozens of inappropriate statements attacking Bradford’s lawyer, Sandra Slaton of Scottsdale, Arizona.

Slaton had filed a federal lawsuit against Cowan on Lund’s behalf for the Down syndrome remark.

The lawsuit was dismissed on a technicality and is pending appeal.

Cowan, a veteran probate judge also involved in a 2018 legal battle over killer Charles Manson’s body, has removed himself from the Lund case and is no longer sitting in probate court.

Before Cowan’s recent departure, he is alleged to have issued an order demanding that Slaton show why she shouldn’t be disqualified from the case for an alleged ‘conflict of interest’.

Cowan alleged that Slaton’s husband was a witness in a previous probate case for Bradford in Arizona, something Bradford’s lawyers deny.

The decade’s long battle has shone a light on a divided family.

The problems started when the Lund twins’ mother Sharon stipulated in her will that they would receive inheritance payouts on their 35th, 40th and 45th birthdays- but only if they demonstrated the necessary mental stability.

She appointed three trustees, which at the time included her husband Bill, a real-estate agent who scouted the Orlando, Florida, Disney World location, and her sister Diane.

Each trustee receives $1million a year until the twins’ payments were made.

The caveat, and its interpretation by the trustees after the twins turned 35 in 2005, has led to accusations of mental incompetence, incest and conspiracy.

On one side of the lawsuit is Brad, his lawyers and his stepmother, Sherry, the fifth wife of his late father Bill, who died in 2008 aged 83.

The trustees decided Brad lacked the mental capabilities and refused his payouts.

On the other side is the Michelle and the trustees, who was awarded her millions, despite accusations of a drug addiction and following a nearly fatal brain aneurysm in 2009 that left her with alleged uncertain mental abilities.

Bradford’s lawyers claim that the probate system, which is designed to protect the elderly and disabled from being financially abused, is susceptible to corruption and fraud.

The longer the client is deemed incapable of managing his or her own affairs, the longer the guardian, attorneys and others get paid and the client has now say, Bradford’s lawyers claim.