Home » Bribery » Has a Black Robe become a License to Steal?

Has a Black Robe become a License to Steal? 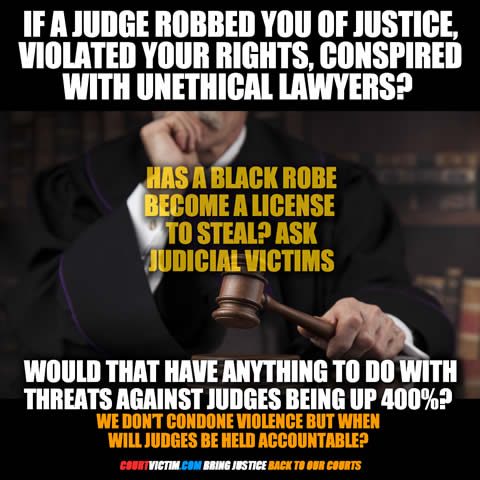 You have to have been victimized by a court to really see and understand the real problem going on with judges in America. The lawlessness, the abuse, the sheer disrespect against the public. With undeserved immunity and a broken system that defends the dishonorable and criminal judge racket that has existed for decades I think the breaking point is near. All you have to do is ASK THE REAL VICTIMS who have been robbed of justice by dirty judges and an epidemic of judicial abuse. I know myself I’ve endured the torture and helplessness of what judicial abuse victims must endure. It’s not just the sheer disrespect, perjury, fraud and embezzlement that went on in court. But the disrespectful manner that Judge Candace J. Beason treated a petition that exposed a criminal and her lawyer for abusing our mother. Yet this below human monster sitting on the bench who was obviously bribed and involved in a conspiracy with the X president of the Pasadena Bar and a law professor Philip Barbaro Jr. had the nerve to say “I don’t see anything wrong”. The total disrespectful, above the law attitude was below disgusting and revolting to a victim who had been a Police officer for the city of Los Angeles for 8 years.

America does not know how corrupt our court system has become and how the worst criminals in America hide behind totally fake images of “your honor, protectors of the elderly, guardians etc”. It’s all a bunch of lies and the old “Wolves in Sheep’s clothing” tactic. From the Court investigators, PVP (forced onto victims lawyers) like Violet M. Boskovich

I was astonished that the entire Los Angeles Superior Court Probate Department was a bunch of frauds involved in the biggest racketeering scam in America that preys on the elderly and weak. Robbing seniors and other victims of their life savings, god given inheritances and hard earned savings. The system is so corrupt that going to FBI, DOJ, the President, Governor, LAPD Elder abuse, City, state and federal attorneys all turn a blind eye to your cries for justice. Even with 100% full documentation and undeniable proof. You get the standard cut and post “See your attorney this is a court matter”. So who you going to call when the Judge is the criminal?

OK so I may feel a little bit sorry for a judge who remotely may be innocent and someone acts out against them. Do any of these judges or the government lose a night of sleep over the pain, helplessness and violated feelings I’ve had to endure of the last 15 years? Absolutely no, not one of them. So why I ask you does none of this surprise me when the media totally ignores the Reuters investigative news stories about judges? Why is the Commission on Judicial Performance so totally corrupt and run by more criminals and frauds?

Can it be connected to what’s really going on with our Judicial?

Now make sure you read what judges are getting away with

Thousands of U.S. judges who broke laws or oaths remained on the bench