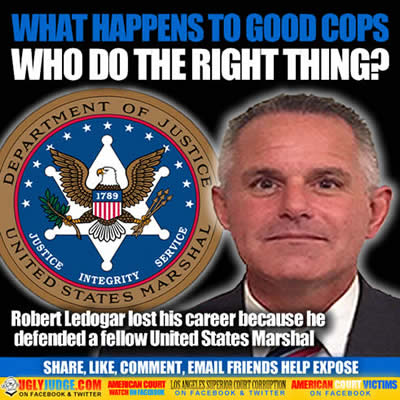 What does government does to good people who do the right thing?

What happened to Robert Ledogar is what happens all over America when good people speak out about bad cops or corruption.

Management and government use the same tactics against victims who seek justice against a broken corrupt system. The guilty assassinate their character, lie, destroy evidence and hide like cowards behind fake images like “Serving and Protecting”.

Until Whistleblower law is followed and strictly enforced nothing will change in America. Until people who speak out about corruption are respected and treated as Heroes nothing changes. It’s no different than the protection laws in Probate court that are useless because dishonorable judges ignore law. No one should be above the law or immune to prosecution.

Robert Ledogar is a paladin, a heroic champion, defender, and advocate of a noble cause. He lost his career because he rose and defended a fellow United States Marshal targeted for sexual harassment, physical assault, and discriminatory behavior in the workplace.

Robert Ledogar was born in Queens, New York, to a young father who had gone to Vietnam and returned to work in the sanitation department in New York. His mother was a stay-at-home mother, and there was one other child in the household, Ledogar’s sister. There were also plenty of aunts and uncles around, and family was considered the most crucial aspect of their lives. Growing up, Ledogar was athletic and played baseball, football, and hockey. He was an average student, attending St. Virgilius and Monsignor McClancy High School.

Robert Ledogar loved the Pittsburgh Steelers growing up, and he and his mom loved music. As a teenager, Ledogar was enthralled with Miami Vice on television. While he and his dad watched the television program, Ledogar realized that he wanted to be a federal agent, arresting drug dealers, and being out on the water on a boat.

Robert Ledogar enlisted in the Navy and became a Master-at-arms, responsible for law enforcement and force protection. While in the Navy, the United States Marshals Service (USMS) sent recruiting material to military members, specifically military police. A Special Agent position was the job that Ledogar had dreamed about since being a teenager, and he applied.

The USMS is a U.S. federal law enforcement agency and operates within the U.S. Department of Justice. It is the oldest U.S. federal law enforcement agency created during the presidency of George Washington. The USMS is an enforcement arm of the United States federal courts and manages criminal assets, transports federal prisoners, and operates the Federal Witness Protection Program, the execution of federal warrants, and the protection of senior government officials. Throughout history, the USMS has provided other unique services, including escort security for missile convoys and safety of the national repository of critical medical supplies. The USMS has a long and proud history, with notable marshals like Wild Bill Hickok, Wyatt Earp, and Bat Masterson.

Robert Ledogar received an acceptance letter from USMS in early 1995 and left the Navy in the same year. One day after his discharge, he was on his way to the Federal Law Enforcement Training Center in Glynco, Georgia. Ledogar’s class consisted of all military members, and he spent 5 months in classes preparing to be a Deputy U.S. Marshal.

Robert Ledogar was assigned to the Eastern New York District, Brooklyn, where he transitioned through several areas of responsibility and got to know the nuts and bolts of the USMS. He was involved in Operations, Prison Transport, Warrants, Protection Details, Judicial Security, Fugitive Investigations, and Special Missions and Programs. With excellent performance reports every year, Ledogar was promoted to Supervisor of the Warrants squad in 2010, with a complement of twelve Marshals.

Robert Ledogar was attached to the New York/New Jersey Regional Fugitive Task Force, with Memorandums of Understanding knitting together over 80 federal, state, or local agencies and five fully operational offices in the New York/New Jersey area. Congress funded this Task Force, and James Comey, former Federal Bureau of Investigation (FBI) Director, referred to the Task Force as “A model for interagency cooperation and success.”

In 2015, Robert Ledogar said he was approached by a Deputy Marshal stationed on the Task Force located in Long Island, New York. She was an outstanding Deputy Marshal and had an enormous responsibility to include management of local law enforcement. She confided in Ledogar, advising him that Task Force team members were harassing her. They were mocking her, trying to intimidate her, and over time, Ledogar discovered that she had been physically assaulted, and her girlfriend had also been harassed.

Robert Ledogar says he confronted the ringleader, who stated that all the accusations were false and the female deputy was just emotional. Two other local law enforcement officers on the task force who had participated in bullying and harassing the female deputy also denied any participation. Ledogar began documenting the discriminatory, harassing, and bullying behavior of three members of the task force. He notified USMS Internal Affairs and filed a report to his boss. Ledogar also told the Supervisor of the task force on Long Island, identifying the three law enforcement personnel. Shortly afterward, during the execution of a fugitive warrant, the female deputy was shoved by one of the three officers named in the complaint in a manner that caused her to fear for her life. Ledogar reassigned the deputy for her safety. The female deputy discovered that members of the Task Force were given copies of her complaint.

During this same time in the United States Senate, the Committee on the Judiciary, headed by Senator Chuck Grassley, received protected disclosures from USMS whistleblowers that detailed reprisal against whistleblower employees and those who participated in protected activity. Ledogar was unaware in 2015 about these disclosures but soon became entangled in his own retaliation and reprisal case, as his protected activity regarding discriminatory conduct by members of the USMS Task Force turned extremely ugly.

Robert Ledogar pressed for an internal investigation of the Task Force members’ misconduct and supported his deputy, helping her file complaints. He corroborated his deputy’s statements and detailed the Task Force members’ misconduct during multiple investigatory interviews under oath. Internal Affairs advised that they felt it was an Equal Employment Opportunity (EEO) matter and turned the complaint over to the Investigative Operations Division (IOD), who dismissed the case.

In 2016, Ledogar, the hunter, became the hunted and ended up on the receiving end of internal affairs investigations. The same members of the Task Force that had been accused of misconduct made allegations against Ledogar that ranged from domestic violence problems to racist comments. Ledogar was accused of several other spurious charges. The charges kept piling on, and Ledogar acknowledged that he was not an angel. He had made mistakes but never received any enumerations or committed any act with malicious intent.

Robert Ledogar’s personnel record was stellar up to the point of internal affairs investigations. He was a career Deputy U.S. Marshal and U.S. Navy Veteran, serving as the Supervisory Deputy U.S. Marshal for the Eastern District of New York Warrant Squad/Enforcement Division, and was devoted to the mission of the United States Marshals. He supervised and combined efforts with the New York-New Jersey Regional Fugitive Task Force, which led to the successful location and arrest of New York City’s most dangerous violent offenders. He apprehended and supervised the apprehension of thousands of violent criminals. He was honored with numerous Federal, State, and Local Law Enforcement awards for his stake in keeping American communities safe.

Robert Ledogar’s performance reports were outstanding, but he had questioned the integrity of the Task Force, an entity funded by Congressional monies and featured in articles and publications noting it’s successes. The television program Manhunter was based on the Task Force. Although a deputy marshal referred to the Long Island Task Force as a high school with guns, the wagons circled quickly to cover the Task Force and retaliate against the whistleblower. Over the next four and a half years, Ledogar was notified by internal affairs that he was the target of at least four internal investigations stemming from allegations made by the officers on the Task Force that Ledogar had documented earlier for misconduct against the female deputy marshal.

During the internal affairs investigations, Ledogar was working full time on high profile cases, including the case of Joaquin “El Chapo” Guzman, who was extradited to the U.S. in January of 2017 and housed in the maximum-security wing of the Metropolitan Correctional Center, Manhattan, New York.

In October of 2018, Ledogar was notified he was a target by internal affairs, and as more allegations surfaced, Ledogar was subjected to half a dozen interviews. Four internal affairs cases were opened, and three ruled unsubstantiated. Ledogar underwent days of interrogation and fought back successfully, even going so far as to self-report himself for writing a recommendation letter on Marshal letterhead for a friend.

Robert Ledogar’s reputation was that he would help anyone, anytime. He was a fierce defender of the underdog, the weak, the bullied. He was good at his job, recruiting informants and honoring the history and ideals of the USMS. Ledogar defended one of his deputy marshals because she told the truth. He could not imagine ending up as a whistleblower because he was only doing the right thing as a supervisor.

Stress from the internal affairs investigations was starting to affect Ledogar. He put in his retirement papers, shocked and confused how vicious and vindictive his agency had become and how his reputation and livelihood were being threatened and smeared by a constant stream of lies and falsehoods. Two months before his retirement, on April 20th, 2020, Ledogar was notified that he had been fired for lack of candor and conduct unbecoming to a U.S. Marshal. In addition to losing his career and retirement benefits, Ledogar and his family have exhausted substantial financial resources and suffered significant emotional distress.

A deputy marshal on Ledogar’s squad advised that Ledogar was someone who got things done, was well-liked, and stood up for people. Ledogar, the deputy marshal advised, had diversity on his squad and was the first one to raise money for people in need.

Over 120 letters were written on Ledogar’s behalf after his termination, and the National Police Defense Foundation has established a legal fund. To lose one’s identity is crushing; losing it because you stood and spoke the truth for a subordinate is just incomprehensible and cruel. Retaliation is the coin paid for shining a light on wrongdoing. Robert Ledogar is paying a steep price for doing what was right.

USE THIS LINK TO DONATE DIRECTLY

Donations for Robert Ledogar’s legal fund are accepted at the below address: