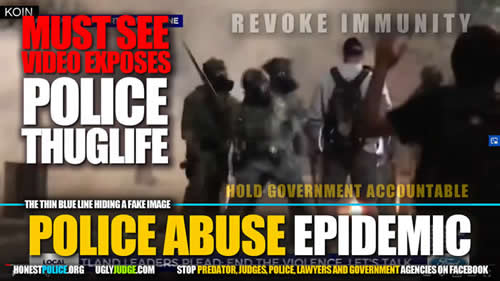 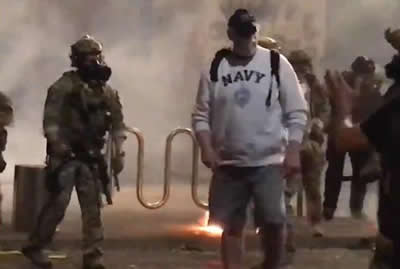 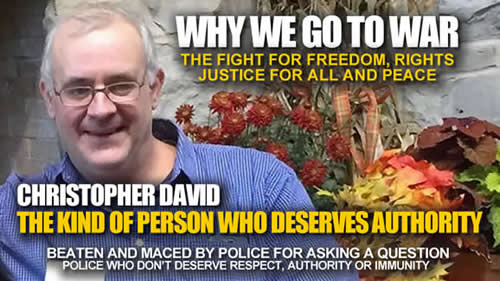 LACK OF ACCOUNTABILITY, HISTORY OF PERJUY, COVER UP, INSIDE INVESTIGATION BY FRIENDS, RIGGED COURT SYSTEM AND UNDESERVED IMMUNITY, CORRUPT POLICE UNIONS. OUR QUESTION IS “IF THIS WAS NOT ON VIDEO WHAT WOULD THE OFFICERS INVOLVED HAVE SAID?”. That in itself is the problem with police today. They are allowed to lie, change facts, write perjured reports and use a bullshit “fear” excuse.

The veteran said he wanted to ask the officers whether they felt their actions violated the Constitution. Video shows them tear-gassing him and smashing his hand with baton blows.

The Navy veteran stands passively in Portland, Oregon, amid swirling tear gas. One of the militarized federal agents deployed by President Donald Trump swings a baton at him with full force. With both hands. Five times.

Under the assault, 53-year-old Christopher David seems like a redwood tree — impervious to the blows. But in a video shot by a reporter, another officer — wearing green military camouflage, a helmet and gas mask — sprays David full in the face with what appears to be pepper gas.

Although protests in Portland have been going on for weeks, Christopher David, 53, told the Associated Press he decided to join the protest for the first time Saturday night because he was disturbed by reports of federal officers in unmarked cars arresting people without explanation.

“What they were doing was unconstitutional,” said David, a graduate of the U.S. Naval Academy and a Navy veteran. ”Sometimes I worry that people take the oath of office or the oath to the Constitution, and it’s just a set of words that mean nothing. They really don’t feel in their heart the weight of those words.”

David said the federal officers came charging out of the federal building and plowed into a group of protesters. He said he stood his ground after one officer shoved him backward. Another officer pointed a semi-automatic weapon at his chest.

“They came out to fight,” David said. What happened when he tried to talk to the officers is captured in a video shot by Zane Sparling, a reporter with The Portland Tribune.

One officer hits David with a baton five times, blows that broke his ring finger and another bone in his hand. David doesn’t move or flinch. Then, another officer – wearing green military camouflage, a helmet and gas mask – sprays him in the face with what appears to be pepper gas.

David tries to shove the officer’s hand away, then finally turns around and walks away while raising his middle fingers. He is wearing a Navy sweatshirt and hat.

Video of the incident has more than 13 million views as of Tuesday morning. David said he will need reconstructive surgery on his finger.

Kenneth T. Cuccinelli, acting deputy secretary for the Department of Homeland Security, told CNN that he was “familiar with the video” and that the officers were with the U.S. Marshals Service. Cuccinelli said DHS officers were in Portland because of threats to federal facilities but added that “maintaining an appropriate response is an ongoing obligation.” FULL STORY

NEWS STORIES
They Hit This Navy Vet with Batons. He Didn’t Give an Inch
Navy veteran beaten and pepper-sprayed by federal agents at protest in Portland
A Navy Veteran Had a Question for the Feds in Portland. They Beat Him in Response.
Navy vet beaten by federal agents: ‘They came out to fight’
‘Captain Portland’: Man famous for being beaten in Oregon protest said his Arizona youth is ‘core part of who I am’
A Navy vet asked federal officers in Portland to remember their oaths. Then they broke his hand.
USNA Graduate, Vet Christopher David Beaten By Federal Agents In Portland: ‘They Came Out To Fight’

‘Not made of steel’: Navy vet recounts beating by fed officers

Veteran discusses getting hit by unmarked police in Portland

Navy vet says he was beaten, pepper sprayed by authorities at Portland protest