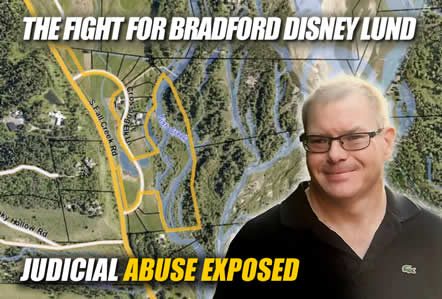 The Trustees will receive hundreds of thousands in self-enrichment from the sale, according to Lanny J. Davis, attorney for Lund
“One has to ask why the Trustees are so intent on ignoring the wishes of their own beneficiary, to whom they owe a fiduciary duty,” said Lanny J. Davis

LOS ANGELES, Jan. 11, 2022 /PRNewswire/ — Walt Disney’s grandson, Bradford D. Lund, has filed a request for a temporary restraining order in the Los Angeles County Superior Court in an attempt to block his four trustees – L. Andrew Gifford, Robert L. Wilson, Douglas M. Strode, and the First Republic Trust Company (“FRTC”) (collectively, “the Trustees”) – from selling a pristine and sentimental 110-acre Wyoming family ranch, set on the outskirts of Teton National Park (owned by his trust, together with his sister’s trust) to an undisclosed third party. The Trustees even refused to tell Mr. Lund who the buyers are. He alleges that he has filed this emergency request in order to prevent this family treasure from being lost forever, most probably to commercial development.

According to the filing, Mr. Lund has been attempting to stop the sale since September 2020 when the Trustees for the first time indicated that they entered into a sales contract with an unidentified third-party. Mr. Lund’s attempt to stop the sale in the Wyoming state court system was unsuccessful based upon a legal doctrine, forum non conveniens, where the Wyoming court determined that the issue should be decided in the Los Angeles courts with the rest of Mr. Lund’s probate case. The Wyoming decision was not based on the merits of Mr. Lund’s complaint.

According to Mr. Lund, the Trustees had originally agreed in April of 2019 to allow him to purchase his sister Michelle’s ownership in the ranch for an agreed amount. The purchase was to be made with Mr. Lund’s trust assets. The Trustees allegedly violated their agreement with Mr. Lund and went forward to sell the ranch to a third party. Mr. Lund believes that the Trustees are only concerned about personally benefiting financially and not concerned about the wishes of Mr. Lund or their agreement with him.

Mr. Lund’s filing alleges “the only benefit from the sale of [the ranch] is to the Trustees:

The Ranch has been in Mr. Lund’s family for forty years, and his filing asserts that it was always meant to be kept in the family for their use and enjoyment. Mr. Lund believes that the law supports his claims that the Trustees should not be taking any Real Estate Fee for the sale of the ranch and that by doing this they have created a conflict of interest and they are violating their fiduciary duty to him.

“One has to ask why the Trustees are so intent on ignoring the wishes of their own beneficiary, to whom they owe a fiduciary duty,” said Lanny J. Davis, an attorney advisor for Mr. Lund. “My client has established that he and his sister’s trusts are funded more than enough to last their lifetimes, and the loss of this precious childhood property would be incalculable.”