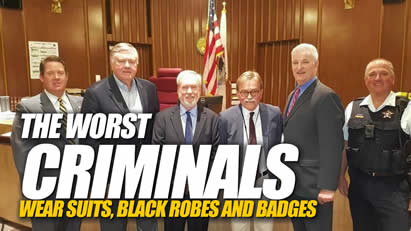 On April 5, as a part of the Lake County Sheriff’s Office Leadership Enrichment Series, former FBI Special Agent Terrence Hake was invited to speak on Operation Greylord, an undercover operation in the 1980s to investigate corruption inside the Cook County judicial system.

Operation Greylord lasted over three years in the 1980s and included local, state, and federal law enforcement agencies. During the investigation, 103 people were indicted on corruption-related charges with most of those charged either convicted at trial or by pleading guilty.

Hake, while employed as a prosecutor in the Cook County State’s Attorney’s Office, played an important role in this investigation when he went undercover for the FBI, exposing the corruption occurring in the judicial system. At the conclusion of Operation Greylord, Hake became an FBI Special Agent, graduating from the FBI Academy in 1984 and served as a federal law enforcement officer for 23 years.

“It was an honor to host Mr. Hake,” Sheriff Mark Curran said. “His experiences and story are an excellent example of how the justice partners must work together to maintain and ensure the continued integrity and trust of our justice system.”

Sheriff Curran introduced the sheriff’s office Leadership Enrichment Series as a part of his ongoing efforts to raise the bar at the Lake County Sheriff’s Office. Past speakers have included Medal of Honor Recipient Allen J. Lynch, who discussed serving with honor and avoiding complacency; and Chief Tim McCarthy, who served in the U.S. Secret Service and is notable for defending President Ronald Reagan during an assassination attempt, in which he discussed resiliency and returning to duty after being involved in a critical incident. These speakers provided inspiration to sheriff’s office personnel by sharing their actions and experiences, so others may learn from them while connecting with moments in the nation’s history.

“It is my hope our command personnel learn from these speakers and utilize what they’ve learned to continuing providing great leadership to all of our personnel, ensuring the integrity and honor our uniform represents,” Sheriff Curran said.