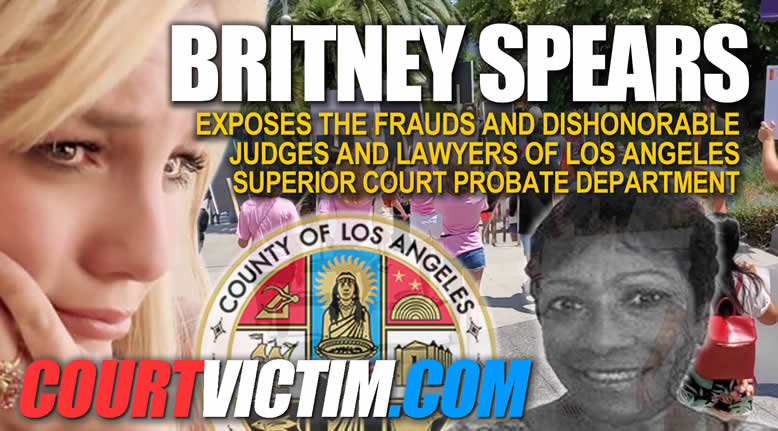 Be sure to add YOUR REVIEW above about your experience or nightmare at one of the most corrupt courts in California.
With an average rating of 2.9 out of 5 it’s obvious beyond a doubt getting justice in Los Angeles County is no longer possible

MAJOR VICTORY: Three weeks after Britney Spears’ comments in court condemning the conservatorship that has controlled her life for 13 years, a Los Angeles judge has approved the singer’s request to hire her own attorney in her conservatorship case.

Three weeks after Britney Spears’ impassioned court appearance demanding an end to the conservatorship that has governed her life for 13 years, a Los Angeles judge approved the singer’s request to hire her own attorney rather than have one appointed for her.

On Wednesday Britney Spears was back in court, railing against her father and the conservatorship she says has ruined her life. The judge granted her the right to choose her own attorney. NBC’s Erin McLaughlin reports for TODAY.

Legal analyst Lisa Green joins TODAY to comment on Britney Spears winning the right Wednesday to choose her own lawyer in her conservatorship battle. “I think we’re going to look back at yesterday as Britney’s independence day,” Green says, adding that the pop star’s new lawyer is going to be “the fierce advocate that Britney, like every American, deserves in court.”

A Los Angeles judge has said US pop star Britney Spears can choose her own lawyer in the fight to end her controversial conservatorship.
The ruling came on Wednesday as Spears addressed a court or the second time in less than a month.
Spears demanded once again that her father be removed from the legal agreement that has controlled her affairs for years.
In court last month, she made a dramatic plea to end the agreement.
But a judge denied the pop star’s request to remove her father Jamie from his role overseeing her conservatorship. Judge Brenda Penny said she could not make a ruling until the singer files a formal petition to terminate the arrangement.
Britney, 39, has been under the conservatorship since 2008, when concerns over her mental health prompted her father to petition the court for legal authority over his daughter’s life.
Emily Maitlis is joined by US investigative journalist Ronan Farrow.

A judge allowed #BritneySpears to hire an attorney of her choosing at a hearing Wednesday in which she broke down in tears after describing the “cruelty” of her conservatorship. Los Angeles Superior Court Judge Brenda Penny approved Spears hiring former federal prosecutor Mathew Rosengart, who called on Spears’ father to immediately resign as her conservator.

On Wednesday Britney Spears was back in court, railing against her father and the conservatorship she says has ruined her life. The judge granted her the right to choose her own attorney. NBC’s Erin McLaughlin reports for TODAY.

Fans of Britney Spears protested downtown Wednesday outside of a scheduled hearing over the pop star’s conservatorship case.
WHOSE SITE IS Lisa MacCarley on when she has a past of her own Probate abuse and working with the worst judge Aviva K. Bobb

ABC10s Andie Judson spoke with Free Britney movement leader Lisa MacCarley about the new update in Britney’s fight for control of her empire.