Home » All Posts » Is Someone Shopping Around For a Judge?

Is Someone Shopping Around For a Judge?

By Bob All Posts 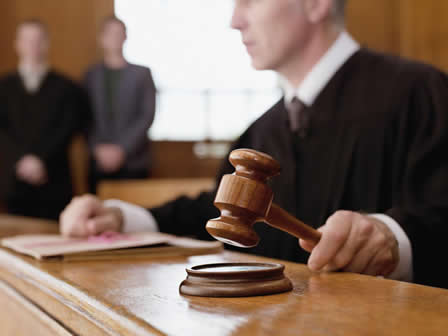 Yes, it’s 100% true, that LIEyers will sometimes try to “shop around” for a judge or Circuit to hear their case, because there may be a better chance that they will get one who is more inclined to “rule” in their favor as regards objections made and evidence allowed than some OTHER fake judge!  Now how does that comport with the idea of a “fair” and speedy trial?  Logic tells us that it does not.  So, with that data known, does it make any sense to play along in the charade of the legal system/Matrix if we do not want to and do not want to?

If we know that the fake judge may be biased against us, why would we think that we’ll get a fair trial?  We are guaranteed a Right to a fair and speedy trial, but absolutely nowhere at any time are we assured that we will actually GET a fair trial!  Why is that?  It’s because even though it’s not spoken out loud, it is understood that it is totally impossible to make that guarantee, as ALL of the fake judges are in reality, not one iota better than thee or me!  ALL of them have their own prejudices, short comings, peccadilloes and foibles just like everybody else does!  They are alcoholics, spouse and child abusers, drug users, tax cheaters, etc.  They’re not gods of any kind, you see?  They are not of a superior intellect, or morals or anything else you may name, they are just men and women like the rest of us, so to expect even just one of them to be able to act any differently than the rest of us, is pure folly of the highest order!!

If we are to put our life, liberty and property into the hands of men and women who are not fit to be judging even a dog show, we MUST be told what that reason is!  What reason could there possibly be for us to acquiesce to what are their shenanigans at best, and outright crimes at the worst?  There is NO reason whatsoever at any time to allow criminals in black robes to sit in judgment of us, even if it be that they will have their Road Pirates execute us for refusing to be made one more victim of their over inflated ego and insatiable lust for power and money!!

Judge shopping is not something that the various Actors, Operators Agents or Officers of the legal system like to admit exists, so it’s not defined in the law dictionaries.  But, it can be read about in other places in various articles on the subject.  Just the idea alone that it may exist, is enough to give us an exit point from the legal system/Matrix.  Again, it comes down to where is our guarantee that we will actually get a fair trial, with the unanswered question of “Has this case come before a particular judge through some kind of machination or maneuver” hanging over our head?

And it’s not just a scurrilous LIEyer who may be guilty of this heinous crime of fraud we call judge shopping, but also in the higher echelons of the legal system/Matrix too, this was done, where a hand picked buffoon and pompous ass of a fake judge was used to help stack the deck of a sham trial with the O.J. Simpson case!!  ALL of the bases were covered there to engineer the desired outcome.   Use of improper venue, biased jurors, incompetent fake judge, hidden evidence, incompetent witnesses, disallowed direct testimony of a witness immediately after the crime of murder took place and the list just goes on and on!

There, all of the top players of the legal system/Matrix were in on it and all agreed to it, for if they weren’t in total agreement, they wouldn’t have been able to pull off what could possibly be called the REAL crime of the century; the rigging up of a trial into a mockery of justice.  All that it would have taken to ruin the whole charade, would be for just ONE honest man or woman in a position of power to speak up and point out that the trial was being rigged, but not one did.  For if any of the thousands of LIEyers in the legal system/Matrix had dared to breathe a word of what was going on behind the scenes, they would never be allowed to win a case again!  They would have been drummed out of the LIEyer’s Guild and forced to close their office and find honest work somewhere.  The Operators of the legal system/Matrix are very serious about taking care to keep their criminal organization running and pulling in many billions of dollars of business each year!

And any real “news reporter” exposing what was going on, would have been fired immediately and relegated to jobs of flipping burgers or mowing lawns for the rest of their life.  So the “Fourth Estate” turned a blind eye and deaf ear to what was going on.  All who were left to speak, were the ones who couldn’t be heard, because of the agreements in the media to not break away from the narrative being given to them.  They saw more benefit to getting an acquittal than exposing the truth.  Truth is neither sordid or ugly, but we are told it is so we won’t look for it or want any of it.  It is one of the most beautiful things that we can ever behold, it lasts forever, never withering away or dying.  Truth cannot be rebutted, and it stands on its own.  It never needs any defense, because it cannot be attacked.  All that it needs, is to not be covered up by lies.

Any man or woman who goes out shopping around for a biased judge in order to help them win their case, is openly and notoriously admitting that they are promoting lies and deceits, and they haven’t a chance of winning in a fair contest of facts against the lies.  They are saying that their case is so weak, so lame, that it cannot win without resorting to cheating!

What sane man or woman wants to believe in a lie, when the truth is out there too?  Not even one of them would do so!  If they did prefer a lie over the truth, then they can be certified as being insane.  Lies never get us to any place of any importance, but truth, that will easily take us there every time and on time!  So why go with the lies?

There is said by some, to be a mantra among a certain culture on Earth that goes like this; Why tell the truth, when a lie will serve almost as well?  Is truth really something that is so rare, that it needs to be rationed out in meager amounts so we don’t run out of it?  This author says an emphatic NO!  We can never have too much truth, but just one little lie, that is far too much!  We have an unlimited amount of truth, it exists all around us, we just need to look for it, and we will find that it’s right under our own nose!  Only when we are blinded to it, do we not see truth.  That blindness comes from many places and in many forms, but fortunately, it is not a permanent condition.  We need only a real desire to see truth, for it to appear before us.  Those who do not want to see truth never will.  It will always remain hidden from them, no matter how hard it might bite their backside.