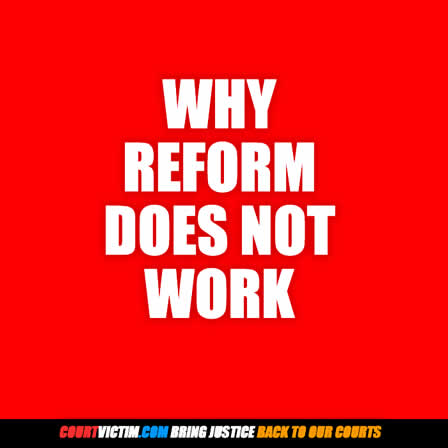 “The truth is a terrible thing, but not compared to falsehood.”

Legal reform is a banner under which many organizations fly. “Guardianship reform,” “Defund the police,” “End targeting,” “CPS reform” – some of these movements have clear political motivations and some simply seek to address corruption within the system. And none of them have really borne fruit.

The reason is not the dedicated efforts of the organizations or individuals carrying these banners. The reason is that the very system through which reform is sought is a facade.

Those in the guardianship reform movement are acutely aware that the system isn’t working. There are strong and protective laws on the books but every day, guardianship proceedings convene in courts across the US and laws are ignored, judges make decisions that have no standing in law and as a result, lives are destroyed. Assets are pilfered through these proceedings and in many cases, those under guardianship die under questionable circumstances. The Probate Murders: The War on the Vulnerable through the Courts (Part One) In some circumstances, the deaths can clearly be considered to be murder yet no one is charged, no murder trial takes place, and family, bruised and shaken by the events, migrate to a legal reform of guardianship movement.

Writes retired Illinois attorney Ken Ditkowsky, “We have enough legislation as to Guardianship and its ramifications.” He goes on to explain how guardianships often get launched:

In the Sallas case and too many Guardianship cases a corrupt (or ignorant as to the law) judge anxious to please (or paid to please) the petitioner allows on a dozen psychiatrists on call to testify that he examined the designated victim and he found her to be totally unable to function. In fact, this “medical professional” for a fee will testify that you too are unable to function and need the care of a guardian.

The guardianship of Amelia Sallas, which is being heard by Judge Shauna Boliker in Cook County, Illinois, might concern anyone who thinks his assets and marital status is secure. Over nine million dollars have been bled out of the Sallas’s bank accounts during the course of the guardianship. And the money that has been appropriated by Amy Sallas’s guardian also belongs to her husband. Dean Sallas is not under guardianship and, if you go by the law, the court has no jurisdiction over his assets.

Nevertheless, the court has ignored this legal fact and has reduced him to near homelessness. To add to the burning pyre, Public Guardian attorney Lisa Casanova has unilaterally decided to bar Dean from seeing his wife of over fifty years. There is no court order to buttress this torpedo into their marriage and when contacted about this, Casanova refused to discuss it. Dean has filed motions in the court to have this reviewed by Judge Boliker, who just can’t seem to get around to it.

The Sallas case is not unique. Across America, similar legal abuses take place every day.

And so these sorts of movements are born. New laws are proposed, sometimes passed into law by state or federal legislatures, but at the end of the day, nothing changes.

Because the problem is not in the law. The problem lies in enforcement.

When you deal with failure to enforce, you are actually looking at the evidence of systemic collusion. This is where the allegations that the legal system itself is a facade gain substance. How could it be that the enforcers, and here we are talking about judges and prosecutors and even local police and higher up the chain, such as the FBI, are all in on this together?

There is an answer which transcends “conspiracy theories” – that tattered and abused phrase used to discredit those who are beginning to connect dots. The answer isn’t pretty, however, and flies in the face of all we have been taught about the American way.
Declare Your Independence!

Profit outside the rigged system! Protect yourself from tyranny and economic collapse. Learn to live free and spread peace!

We’ve been lied to. The America we celebrate on Independence Day, the America which has an intact system of justice (so say its proponents) simply doesn’t exist. The real America consists of bribed judges and prosecutors, who are paid off under the table to execute a slanted form of justice which enables certain agendas to be promoted. It consists of police who know full well that they have been given nearly a carte blanche to attack and kill Americans (mostly of color), the show trial of Derek Chauvin notwithstanding. Hey, you gotta throw the plebes a bone every now and then to ensure that they are still gobbling up the propaganda.

There are many ways to bribe a judge or prosecutor. Two thirds of the judges I have personally researched have mortgage histories redolent of money laundering. How does that work, you ask? In fact, this constitutes a nearly opaque and slam dunk way of bribing a public official. Judge X takes out a loan and Mr. Y pays it back. And it all looks pretty kosher, on the surface anyway.

Except when you drill down to the details. Too many judges on the take are greedy, and when they start to reconvey more in mortgages than they make per year on their judge’s salary, it becomes abundantly evident. In addition, hiring a public official’s relative for a position which he or she is not qualified for then paying them an abundant salary also qualifies as a pay off. Does this sound like Hunter Biden?

There are also reports of public officials being paid off with nursing home beds. These beds, when occupied, bring in several thousand dollars a month. They are so lucrative that some nursing homes, such as Sunshine Retirement Homes, are advertising that they will pay a bounty for referrals which result in a new occupant.

The wholesale buying of justice does not mesh with the goals of the legal reformers and they often choose to ignore this. Time after time, there is an outcry for legal reform and the legislature duly swings into action. California was the first to pass a package of laws to reform the abusive guardianship system. The Omnibus Conservatorship Reform Act of 2006 was heralded as providing further protections for those under guardianship in that state. Fifteen years later, the status quo remains unchanged. The new bureau, formed by the Reform Act, and called the Professional Fiduciaries Bureau, has fallen to regulatory capture and essentially protects the guardians. Other states followed California’s lead and like dominoes also fell to regulatory capture.

Still the reformers persist. It is a hard pill to swallow, that our country does not promote or honor justice, and many would prefer to bury their heads in their law books, searching for a legal solution to a rogue system.

It may not be a quick fix but finding which public officials are on the take and systematically exposing them may be our stronger course of action. The above mentioned Judge Shauna Boliker might be ripe for this sort of exposure. A survey of the Cook County records department came up with some disturbing revelations about her. Three times in the last ten years JP Morgan Chase has filed foreclosure actions on her residence in Chicago. In addition, several Mechanic’s Liens were filed when she hired S.N. Peck Builder to refurbish her home then couldn’t find the cash to pay them. IRS liens totaling hundreds of thousands of dollars were also filed against her husband, David Andrews, who has a financial relationship through his work with Byline Bank in Chicago, a bank which Boliker is heavily favoring in her decisions.

Recently, Judge Boliker issued two contradictory sets of orders for the same hearing in the Sallas case. She both approved the accounting by the guardian and then didn’t approve it, setting it instead for hearing. The court was contacted asking how this could be. Primly, media contact Mary Wisniewski informed this reporter that the court doesn’t comment on ongoing cases.

And that is apparently now Justice, American-style. I was thinking of closing with something corny, like “And you can take that to the bank!” But unless it is Byline Bank and you happen to be Shauna Boliker, it probably won’t be negotiable.

Janet Phelan has been on the trail of the biological weapons agenda since the new millennium. Her book on the pandemic, At the Breaking Point of History: How Decades of US Duplicity Enabled the Pandemic, will be published in 2021 by Trine Day. Her articles on this issue have appeared in Activist Post, New Eastern Outlook, Infowars and elsewhere. Educated at Grinnell College, UC Berkeley and the University of Missouri Graduate School of Journalism, Janet “jumped ship” and since 2004 has been writing exclusively for independent media. Her articles previously appeared in the Los Angeles Times, Oui Magazine, Orange Coast Magazine, the Long Beach Press Telegram, the Santa Monica Daily Press and other publications. She is the author of the groundbreaking expose, EXILE and two books of poetry. She resides abroad. You may follow Janet on Parler here @JanetPhelan. To support her work, please go to JanetPhelan