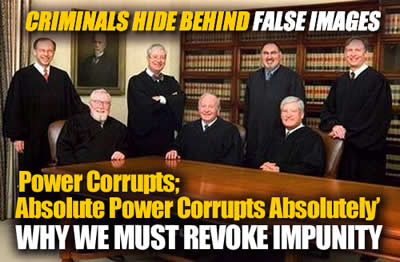 Any Judge, government agent, or bureaucrat who has sworn to uphold the Constitution of the United States – who is violating that oath – is Guilty of Treason. The Penalty is still DEATH BY HANGING. BAR stands for British Accreditation Registry The British Legal System Of Mixed Common And Roman Law Has Been Used To Enslave The USA! 13 Sections / Download – Print – Study – Distribute: http://www.detaxcanada.org/cmlaw1.htm The Federal Zone: Cracking The Code Of Internal Revenue http://www.supremelaw.org/fedzone11/ After the Revolutionary War of 1776 was over – since no actual surrender papers had been signed – King George III decided that the colonies still belonged to him, to England, and all that remained was for him to figure out how to get them back again under his direct control. To do this he determined to use the banks, both of the United States and of England, as one method. But to underpin his efforts, he needed lawyers or attorneys here in the ‘colonies’ to make it all happen. The ‘legal’ ramifications of how things had to be brought about had become an important issue to England ever since the… Read More