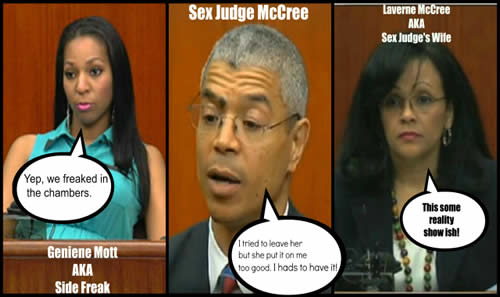 You might think this kind of corruption comes from a judge in Russia or Zimbabwe, but you’d be wrong. Judge Wade McCree was, until recently, a judge in Wayne County Michigan, home to two million people, best known for Motown and Motor City, and of late, the 18 billion dollar debt and subsequent bankruptcy of the City of Detroit.

Judge Wade McCree’s judicial career ended ignominiously this Spring when Michigan’s Supreme Court suspended him for six years, after finding his conduct affected not only the litigants involved, but harmed the integrity of the judicial system as a whole. 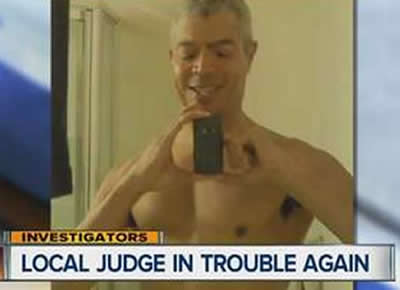 Initially Judge Wade McCree pulled a “Weiner” by texting a partially nude photo of himself to a female deputy sheriff, and was under investigation by the Judicial Tenure Commission. Rather than minding his “p’s and q’s” while under scrutiny for that indiscretion, he began an affair with Geniene LaShay Mott, who was the complaining party in People v. King, a court proceeding involving the enforcement and collection of arrears of child support against Robert King, who was the father of one of Ms. Mott’s children. He was in arrears of support in the amount of $15,000.

Judge Wade McCree’s offenses included:
1. Conducting an affair with Ms. Mott while he was presiding over her child support hearing;
2. Engaging in sexual relations with Ms. Mott in his judicial chambers;
3. Allowing Ms. Mott to access the court house through a rear, private door and utilize the judicial parking lot;
4. Surreptitiously arranging for Ms. Mott’s cell phone to be delivered to her in court by a sheriff so she could call him during the hearing;
5. Texting Ms. Mott from the bench while presiding over other cases;
6. Accepting Ms. Mott’s suggestions as to how he should deal with her child’s father;
7. Giving money to Ms. Mott, as much as $6,000;
8. Lying to the Judicial Commission concerning the date that he ended his affair with Ms. Mott; 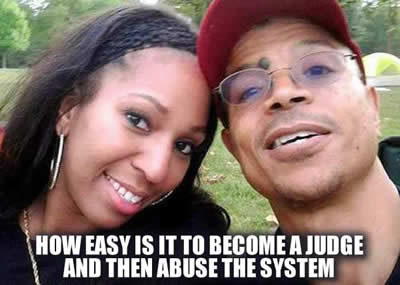 But there was even more. Judge Wade McCree presided over People v. Tillman, reducing Mr. Tillman’s bond in another child support case. Tillman was a relative of Ms. Mott’s, a fact known to McCree. And when his affair with Ms. Mott cooled down he lodged a complaint with Wayne County’s Prosecuting Attorney, alleging that Ms. Mott was stalking him and extorting him by demanding $10,000 in exchange for terminating her pregnancy and not revealing the affair and pregnancy to Judge McCree’s wife. In fact, the alleged crimes never occurred.

While Judge McCree’s attorney argued “no harm, no foul”, the judicial panel, comprised of seven judges, disagreed, saying the judge was well aware that his conduct was egregiously inappropriate as evidenced by an email he sent to Ms. Mott:

“Second, you are the complaining witness on a case that is before me. Naturally if it got out that we were seeing each other before your baby daddy’s case closed, everybody would be in deep shit”.

As for the aggrieved Mr. King, he filed a lawsuit against Judge McCree alleging constitutional violations, including the right to equal protection under the law and the right to be treated fairly in legal processes. District Court Judge Avern Cohn ruled against Mr. King finding that Judge Wade McCree’s decisions in King’s case were “judicial acts” covered by “judicial immunity”, a protection that applies even if a judge’s actions are negligent, incompetent, or malicious.

“Casual readers of this opinion…may erroneously conclude that…we are somehow endorsing Judge Wade McCree’s conduct or going out of our way to protect one of our own…We do nothing of the sort.”

Actions Speak Louder than Words and what other judges do when one of their own commits a crime or abuses their rights is a huge sign of the injustice, bias decisions and a broken system run by frauds and liars.

Judge Wade McCree, who said in the report that the claims he sent the photo to the woman amount to hearsay, wasn’t apologetic, or embarrassed, by the photo.

Judge Wade McCree, who is married, comes from an esteemed judicial background: his late father, Wade H. McCree, Jr., was appointed the U.S. solicitor general by Jimmy Carter, according the University of Michigan Law School, where he taught in the 1980s.

Americans need to be exposed to what is really going on in our American court system. We’re over paying dishonest judges, giving them power and immunity which many of them abuse. Children, families and innocent people are victimized, destroyed and  abused by people who feel they’re above us because they wear this black robe of shame

America will never have justice if our system continues to be based on money and profit instead of justice. Our legal system is broken and mainly due to the fact that friends can judge friends.  Lawyers are governed by their own as well
as judges which results in no punishment or control. Judge Wade McCree is an example of abuse of power and how a criminal, liar and fraud can easily become a judge. Once wearing the black robe of shame that judge can terrorize the public, cheat the system and profit from dishonesty. This is not the imagination of one person but reality which due to social media can no longer be swept under the carpet. Major media has failed the public and rarely gives needed attention to the real monsters of our society. Judges, lawyers, police and government are not held responsible or accountable. Often the real victims of these victims are treated as criminals, ignored, characters assassinated and even prosecuted for made up crimes to keep them quiet.

There are many other obvious judges who have been fully documented and reported yet nothing is done. Those who are brave enough to step forward are called “TERRORISTS”, liars and criminals. Its the old game, “don’t like the message. Kill the messenger”.

Meet Judge Socrates Peter Manoukian of Santa Clara County California. Not only does he abuse his powers as a judge lying to police and government when exposed for dozens of crimes and sabotaged cases he is protected by his own family member Associate Justice Patricia Bamattre-Manoukian
This obvious unfair and biases control where friends and family are involved in our legal system destroys any chance of justice taking place and rights being upheld. 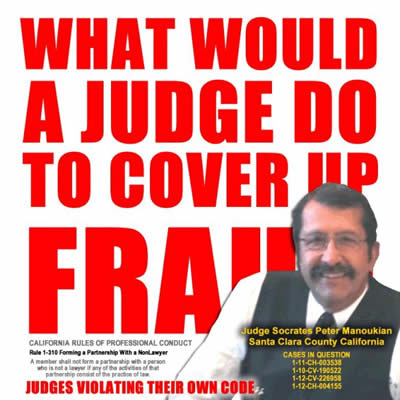