On December 29, 2016, my late husband who was very intoxicated assaulted me and committed suicide. Within hours of his death, My sons father,HALL OF FAMER, BRIAN URLACHER, Attorney Donald Schiller, Attorney Leslie Arenson, Attorney Anita Ventrelli, all of the Law Office of Schiller, DuCanto, & Fleck seized upon his death and conspired with Judge Pamela Loza to kidnap my oldest Son from Illinois to Arizona. In violation of Illinois Statues as well as my Constitutional Rights, a wealthy Father(who resided also in Illinois) was granted “temporary custody” without even appearing in court. Judge Abbey Romanek switched court calls with her “buddy”, Judge Pamela Loza and ordered for my Son to be enrolled in school in Arizona. Judge Abbey Romanek heard testimony from Willow Springs Police Department, Officer Sharon Soltis stating it was a suicide, and I was assaulted and I fully cooperated with police, yet my Son was taken out of state just 10 days after the death of my husband. Judge Abbey Romanek was even nice enough to order visitation with my Son and I before my Son had to leave to Arizona. Judge Romanek stated, “I want Mom to see him as much as possible, I’m sure that’s going to happen!” A Mother whom was assaulted, lost her husband and had lost her oldest Son. Two Brothers, two best friends whom played on the Football Team were torn apart after losing a Step Father whom they both adored and loved very much. ( I want you all to know that if my husband that night didn’t drink an excessive amount of alcohol, he would be here today. My late husband prior to that evening, never raised his voice to me nor was he mean, he was my Best Friend)

On May 2-3, 2018, Judge Loza along with Attorney Arenson,Attorney Howard Rosenberg, Attorney Schiller, and Attorney Ventrelli used photos of my husbands body(SUICIDE SCENE) to award SOLE CUSTODY to his Father. Judge Loza determined that the suicide scene was not safe, Judge Loza described the position of my husbands body as well as the clothing he was wearing! I am not allowed to visit or talk with my 13 year old Son unless it is supervised!! Additionally I have to pay for all the expenses to go to Arizona. I have not seen my Son for over 8 months, please share this post and contact Cook County Chief Judge Timothy Evans, FBI Chicago Office, Illinois Attorney General’s Office, Lisa Madigan, Kwaome Raoul, Illinois States Attorney’s Office, Kim Fox!!

Rate this judge and let others know about it 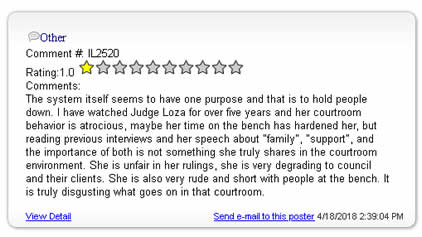 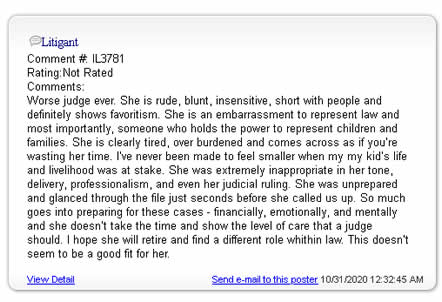 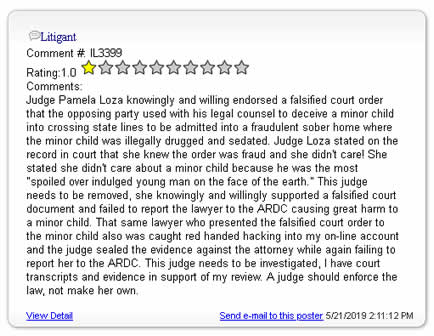